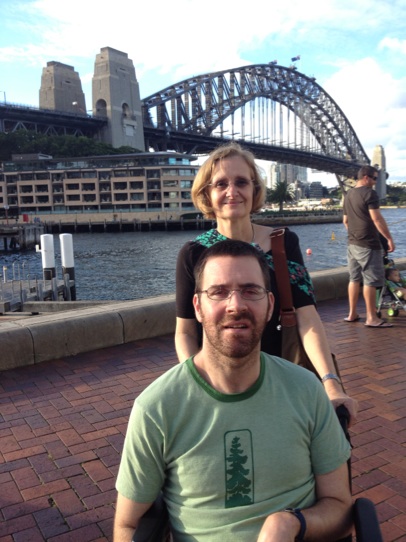 Back in March of 2013 I traveled to Australia for three weeks. The trip was amazing. I saw a great deal and had some wonderful experiences. I can’t wait for the opportunity to return. Getting there, however was something of an ordeal, and I learned a valuable lesson as well as discovered a piece of equipment that no traveler should be without…

We left for the airport early in the morning, arriving at the terminal three hours before our scheduled departure. The initial flight from Charlotte to LA was without incident. After an eleven hour layover in LA (our flight was booked using long hoarded miles so we were at the whim of the airline), we boarded the sixteen hour flight to Sydney. The length of this flight alone caused problems with my time sensitive medicine, but this was an issue I had dealt with before. Regardless, it complicated getting onto the plane and the inevitable trip to the bathroom.

The real fun began when we touched down in Sydney, a mere 35 hours since waking up the previous morning 18 time zones away. My mom and I were both exhausted, not even sure what day it was, and not done with our journey yet. We still had a three hour flight to the north shore before we could spend a few days recovering and unwinding. Complicating matters, we were not meeting up with our travel group until we reached Cairns. So we were left to navigate the Sydney airport on our own. The airport provided a pusher as far as baggage claim, but we were left to navigate the bus between the international and domestic terminals ourselves.

This left my poor mother with two large suitcases, a bookbag, her carry-on, and me to negotiate on board a crowded bus. Oh yeah, and it was raining. As she was hoisting the suitcases up the wet and slippery ramp her ankle turned badly and she nearly went down in pain.

This is the point in the story where some kind gentleman normally comes to our rescue and helps my mom with the rest of the luggage, but on this day there was no such savior, just a line of people staring dumbly and looking agitated at the holdup. My mom is normally the self-reliant type who hesitates to ask for help, but on this occasion she had to turn and ask a young man who was just standing and watching her struggle to ask for assistance.

When we got to the domestic terminal the comedy of errors continued. We were told the airline did not have anyone to assist us to the gate, even after I complained personally and showed them my mom’s black and blue, swollen ankle. They also insisted we check my wheelchair and use one of theirs which was much harder to push. We took the long journey to the gate and then after about an hour in the terminal reaching our gate we were told that our flight had been canceled. Finally we were able to locate someone helpful who had to rebook us through Brisbane to go to Cairns.

Eventually we made it to Cairns and, after a good sleep, enjoyed our time there immensely, but we learned some valuable lessons in the process. None of this would have been possible if my mother had not had anti-inflammatory meds in her purse (she had both ibuprofen and prednisone). Most importantly, however, she had an ace bandage in her carry on and was wearing athletic shoes. Without these we would have had to interrupt our trip and would have probably missed Cairns which turned out to be a highlight of the trip.

My next couple of posts are going to give you some tips on what and how to pack for unexpected events.

Also remember the blog has a new name, Wanderingwheelchair-Allaccesstravel. You may need to resign up to follow and be sure and share with your friends.

2 thoughts on “The Importance of Being Prepared”