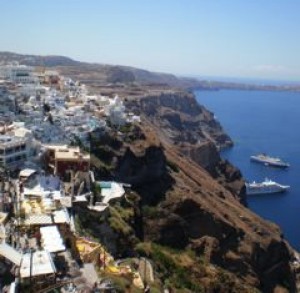 As a disabled traveler I have had to accept that wheelchair accessibility is not as advanced as it could (or perhaps even should) be in all of the places I want to see and experience. Sometimes this means that I am simply not able to go certain places. Most of the world’s most famous tourist attractions have been thoughtfully adapted to be fully accommodating. However, some of the best places I’ve visited were extremely difficult to get to. Difficult but not impossible. I’ve been surprised by the places I can go with nothing more than a little trust in people and a willingness to step beyond my comfort zone.

One such occasion was on the Greek island of Santorini. This gorgeous island town is built on the steep slopes of a dormant volcano. Only the ring of the volcano protrudes from the water, forming a natural harbor that is stunning to behold. The most breathtaking view of Santorini is from atop a tall hill. Climbing it poses a challenge even for totally able bodied tourists, but I knew that I would be missing out on one of the highlights of Greek Isles if I didn’t at least make every effort to ascend. So when our cruise ship dropped anchor I headed down to wait in line for a tender.

Tenders are small boats used to shuttle people ashore when the ship is too large to dock. When the Spanish deck hands saw me coming they started muttering to each other. I am far from fluent in Spanish but knew enough to realize that “puta madre” has nothing to do with my mother. The seas were choppy and everyone was being careful stepping onto the tender. There was a hydraulic lift down to the floating dock but it was decided that the simplest way to get me aboard the vessel was for the deckhands to actually pick up my chair with me in it and pass me to their counterparts waiting onboard the smaller boat. Choppy seas meant that the boat and dock were bobbing unpredictably and not in unison. I’d be lying if I said I was comfortable with this arrangement. However, all I could do was just close my eyes and hope for safe passage. Disembarking the tender required the same maneuver, though it was made easier by the stability of dry land.

Once ashore the real fun began.

There were two options for ascending to the top of the hill, where an historic village square and a scenic panorama of the entire island awaited. First was the old fashioned way which meant a donkey ride up a perilously steep and narrow path to the top. This was not really an option. Fortunately there was also something called an ‘elevator’. It was not an elevator. Maybe there’s no word in Greek for ‘gondola’, but that’s exactly what it was. Wewaited for a half hour in line expecting a simple elevator ride, bt were disappointed to learn that it wouldn’t be so simple. Afterconvincing the operator to stop the gondola for just a minute to allow me to step on, it still wasn’t all that easy to get in the swaying vestibule. But I was able to without incident. The narrow doorway required that we break down my wheelchair and carefully wedge it in.

The ride to the top was unforgettable and the view once we arrived wasworth every moment of the journey. The Aegean’s brilliant turquoise was unlike any water I had ever seen. Set against the rocky slopes of the island and the whitewash homes and churches was truly a sight to behold.