I am excited to announce that I’ve acted on my ideas mentioned in previous posts and created All-Access Travel. I have partnered with a friend who has over a decade of experience in the travel business to create this boutique agency. We will specialize in escorted small group cruises and land tours for a wide range of clients including those with limited mobility or other special needs. We also offer complete travel services and custom itineraries for couples, families, and small groups of all descriptions.

We have relationships with all major cruise lines and tour operators, as well as with destination specialists in over 80 countries. These relationships help us create leisure travel itineraries designed specifically to desires and needs of our clients, whatever they may be. Through our affiliation with Cruise and Travel Experts, we have access to over 600,000 hotel properties , tour operators, local tour guides, and transfer services around the world

Our initial small group offering is an Eastern Caribbean cruise sailing out of Miami on November 14 and returning November 21. Included in the package is airfare from Charlotte to Miami and back, airport transfers, and optional custom shore excursions. More info on the shore excursions to come in future posts. All will of course be customized to suit our group’s needs. If you’re interested you can call or email for more information. dbox@cruiseandtravelexperts.com or 704-608-4689 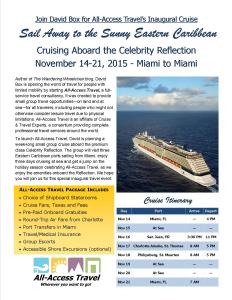 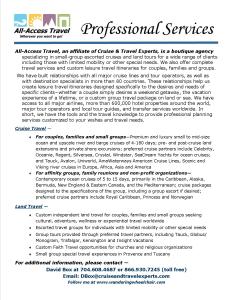 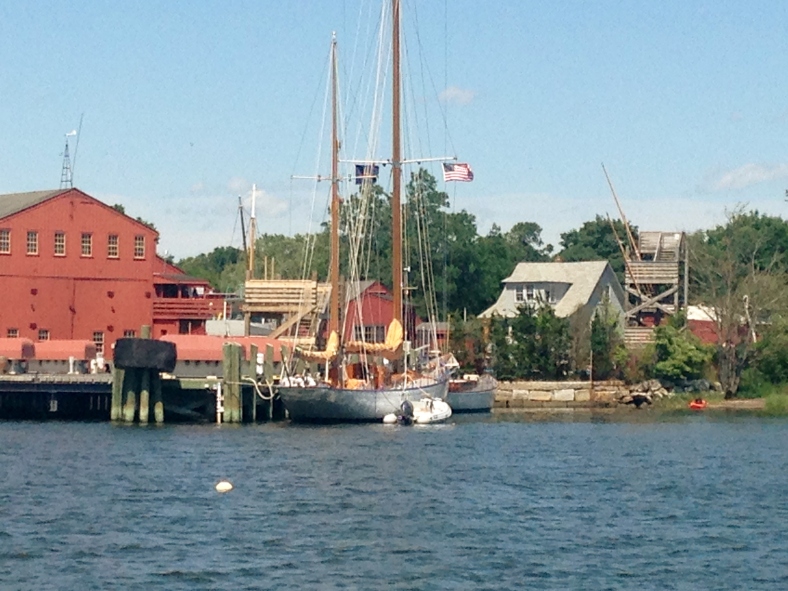 If you are looking for a relaxing, wheelchair-friendly weekend on the Connecticut shoreline then look no further than Mystic Seaport. Mystic is a classic family vacation spot, but it also makes a wonderful weekend getaway.. Just a short drive from both Boston and New York City, it is conveniently located and much more economical than some of the other waterfront destinations in the area.

It’s tough to beat the ADA accommodations at national chains such as the Holiday Inn Express. This is where we opted to stay, having experienced some questionably “accessible” rooms at bed and breakfasts in the past. However, if you are set on having a true New England inn or B&B experience, there are plenty of wheelchair-accessible options in the area, such as the Steamboat Inn and the Inn at Mystic. Be sure to book well in advance and be prepared for a steeper price.

One of the area’s main attractions is the Mystic Aquarium, widely considered to be the best Aquarium in New England. Tickets cost $21 to $30 and are good for several days, great for young children with short attention spans. The aquarium is very easily navigable by wheelchair. Mystic Aquarium is especially known for its sea lions and there is sea lion show three times per day that is very corny but a big hit with kids.

A drive or stroll along “Captain’s Row” lends unique perspective into the life of a ship captain in the days when Mystic was a bustling seaport. You can even experience the thrill of setting sail aboard an Argia Cruises harbor tour. The tour lasts about two and a half hours as the sailboat travels down Mystic River, into the Long Island Sound and back. Included is some commentary on the colorful local history and gorgeous panoramas of the Connecticut coastline. The crew was more than accommodating helping me aboard and clearly had experience handling wheelchairs.

We had some fantastic meals on our trip – trying local seafood and pizza is a must while in Mystic. I wouldn’t blame you if you wanted to experience the iconic Mystic Pizza, of 1980s Julia Roberts fame, but locals overwhelmingly prefer the pizza down the street at Pizzetta. We ordered an Italian sausage, spinach and roasted pepper pizza that came on a thin, chewy and slightly charred crust in perfect New Haven style. Eating indoors requires climbing a steep set of stairs, so wheelchair-usiersshould definitely opt for patio seating.

The S+P Oyster Company was by far our favorite restaurant we tried. Situated in the heart of Old Mystic, it offers a stunning vista of the harbor and Captain’s Row. Often restaurants with such pleasant views offer overpriced menus that leave you wanting more. While this restaurant was by no means a cheap date, the food and drink was deserving of its cost. We started with a grilled apple and goat cheese salad and white wine sangria with mango and apricot. The sangria was crisp, refreshing, and definitely worth the $30 for a pitcher. For my main course, I had a seafood mac and cheese filled with huge, luscious chunks of lobster, swordfish and salmon bathed in a delicate poblano cheese sauce. The meal was outstanding and I’m already fantasizing about going back next summer and ordering that mac-and-cheese again. S&P has a wheelchair ramp leading into the restaurant.

One evening we ventured to the neighboring hamlet of Stonington to eat dinner at a quirky little Mexican café called Milagro. Located in an old house, only the outdoor patio was wheelchair accessible. After sunset, it got pretty dark and tacos are a little messy to eat by candlelight. However, the food was authentic and delicious. I ordered tuna and avocado ceviche, carne asada tacos and a margarita on the rocks, all prepared to perfection. Reservations are highly recommended, as the wait for a table was nearly an hour. Staff was friendly and accommodating, though somewhat frazzled and overworked. However, the Mexican food at Milagro’s was worth the hassle.

In another neighboring old port town called Noank we happened upon a legendary lobster shack named Abbot’s. This picnic-style seafood joint was packed and for good reason. Like most customers in line, we opted to try the Connecticut-style lobster roll, consisting of huge chunks of lobster drenched in butter and piled onto a griddled hamburger bun with a side of coleslaw and potato chips. Every bite was buttery, salty and heavenly. Eating a lobster roll at Abbot’s is a must while on vacation in Mystic. Additionally, wandering through the quaint old town centers of Noank and Stonington are worth the five-minute drive from Mystic, especially if you are in the market for antiques or local crafts.

Accessibility as a whole was definitely acceptable. There were a few spots (especially the stone sidewalks in Stonington and the old buildings in Mystic) that were a little tricky. Also, finding handicap parking was not always easy in the height of tourist season. However the areas of interests are fairly self-contained and small enough, so pushing around really wasn’t much of a problem. Our hotel offered a lift into the pool that was a welcome sight. Overall I give accessibility in Mystic a solid B, and the seaport’s quant New England charm outweighs any minor inconveniences I experienced.

“Why aren’t any of them stopping?” John asked when the third cab he attempted to flag rolled past without stopping.

We were in a pickle. Dr. Rhodes, the somewhat absent-minded leader of our study tour, had departed with the rest of the group. John, Drew and I had been left with a few Euros and instructed to catch a cab. It seemed simple enough, or so we thought.

I saw the vein in John’s forehead pound, and the redness of his face increased in direct variation to the growing number of cabs that sped past. The answer to his question escaped me. Maybe there was some different way to hail a cab in France? But that seemed unlikely. For an instant I suspected that it was because of the wheelchair. But I instantly dismissed that as a possibility. Nobody could be that stuck up, not even the French. Right?

Whatever the reason, it was becoming apparent that we were not going to find a taxi. Our group had departed almost an hour prior. Drew was on crutches with a broken foot and I was being pushed by John in my manual wheelchair.

We had been walking three or four blocks in the blistering summertime heat of Southern France. Drew was pouring with sweat and I knew he had to be hurting. He hadn’t uttered a word of complaint, but there was no way we could ask him to hoof it all the way back.

Just as I was losing all faith in humanity and beginning to curse the French, with their inability to spell anything phonetically, a Mini Cooper pulled up beside us. I’m not sure what I expected to happen next. But after ten days of hearing locals speak only French and Italian, I certainly didn’t expect the cheery British accent that came from the driver.

“You mates look like you could do for a ride.”

John and I looked at the diminutive car, exchanged glances, and surely had the same thought. How the hell were we going to all fit in there? Four grown men (including the driver), a wheelchair, a bulky cast, and two crutches.

“Uhh…,” I felt like I could see the gears of John’s mind working double time to untie this Gordian Knot. “Yeah, we can make it work. We have to.”

Just getting us all into the car required not only intense planning of everyone’s position but, as we discovered on our first attempt, the correct sequence of events. It only took us two tries to get all four people in the car, but then we realized my chair was still sitting outside on the curb. Damn it. We spent another ten minutes looking for something with which to tie it to the roof, until it was decided that John and I could each secure it with an arm out of the window

Here’s how we did it. Just in case you’re ever in a similar predicament, I guess. First, Drew got into the back passenger-side seat. His crutches and walking cast could only fit by sticking them out of the front window, which required some impressive flexibility on Drew’s part. John then helped me cram into the front seat, which had been cranked all the way forward. Next, John contorted himself into the backseat on the driver’s side. Each of us grabbed hold of the wheelchair, which our wonderful saint of a driver had placed on the roof. Lastly, the driver got in and put his seat dangerously far forward for John’s benefit. And we were off.

This, however, is where the fun really began. Our journey back into the city of Nice, though only about 10-15 minutes, included a steep hill with winding switchback curves. I only have one good arm and John was in a grotesquely unnatural position just to get one of his arms out of the front window.

Even driving slowly, I felt with absolute certainty that we were going to lose our grip and my chair would go plummeting over the guardrail. And that would have been the case on more than one occasion if our driver hadn’t somehow managed to steer, brake, and reach up and save the chair all in one deft maneuver. When we finally reached the bottom of the hill a collective sigh of relief was issued.

Then he turned to us and said, “Alright mates, where’s your hotel?”

It was only at this point in the journey that we realized we had no idea where we were going.